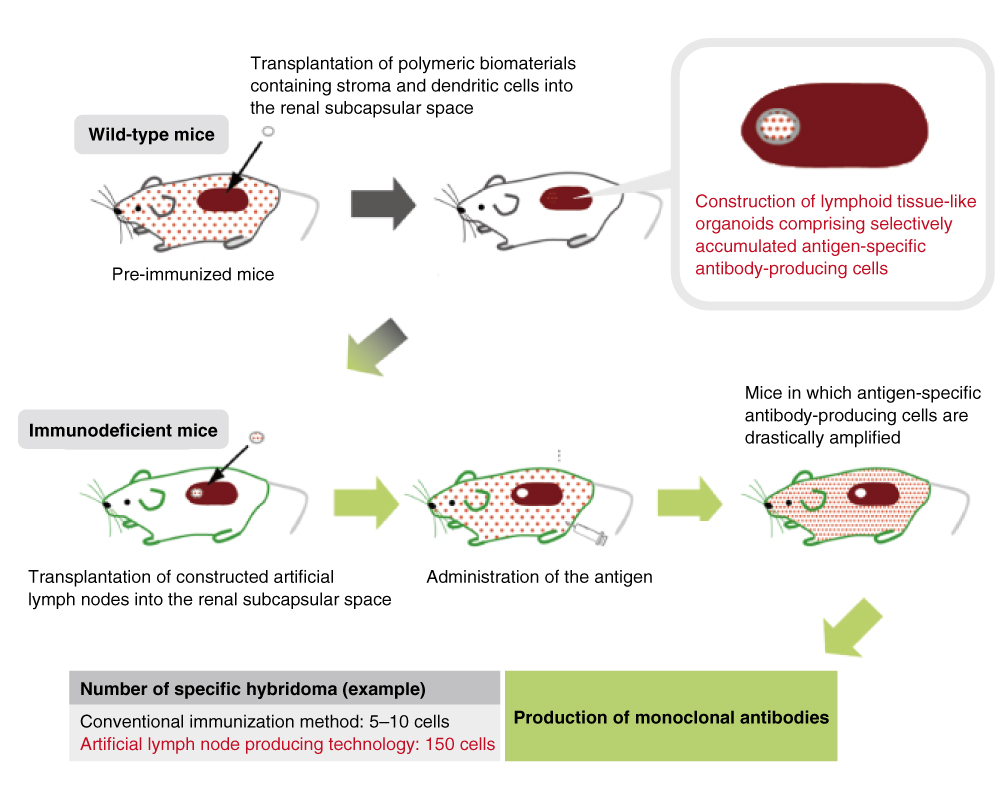 * A phage is a virus that infects specific bacteria. An antibody phage displays antibody fragments (i.e., Fab and scFv) that have antigen-binding ability on fibrous phages of E. coli. The phage contains the gene of the antibody displayed. By selectively obtaining the specific antibody phage against a target molecule (antigen) from a population of antibody phages that bind to various molecules, our technology can thereby also obtain the gene of the target antibody. In addition, it is possible to prepare antibody fragments (scFv and Fab), IgG proteins, etc. from acquired antibody genes.

SPYMEG is a fusion partner cell line developed to obtain fully human monoclonal antibodies in collaboration with Professor Naomasa Yamamoto at the School of Pharmaceutical Sciences, Ohu University. The fusion of SPYMEG cells with antibody-producing cells collected from human blood facilitates extremely efficient and convenient acquisition of fully human antibody-producing hybridomas. Hybridomas developed from any animal cells except mice and rats often lose their antibody-producing ability over a course of long-term culture; however, hybridomas developed from SPYMEG cells and human antibody-producing cells can be stably cultured over a long period of time, and so there are a great many antibodies obtained in large quantities. SPYMEG is far superior in success rate to any of human antibody fusion partner cells reported to date. In addition, antibodies developed by using SPYMEG cells, which are fully human antibodies generated in the human body, can be expected to be applied to a very wide range of immunological research, not only for discovery of therapeutic antibodies, but also for analysis of antibody functions in human body, identification of diseases-specific antigens, searching for candidate vaccines, etc.

MBL is manufacturing recombinant proteins in-house for use as raw materials for diagnostic reagents. The manufacturing of those recombinant proteins requires the preparation of proteins that have the same three-dimensional structure as that of native human proteins in large quantities and at a high level of purity. We are investigating optimal procedures and conditions of production for the preparation of high-purity proteins, such as in-house development of purification columns and introduction of high-density cultivation systems for increased productivity, using animal cells, insect cells, and E.coli. In addition, we are working on further improvement of processing procedures for the improvement of production efficacy and protein storage stability by introducing new measuring equipment and analyzing the physical characteristics of proteins.

The quality of antigens is another critical issue in the development of high-quality antibodies. MBL is capable of obtaining antibodies that specifically react with native proteins by using high-quality recombinant proteins, with the same high level of purity as the raw materials used for diagnostic reagents, as antigens for developing antibodies. In addition, we are developing immunogenicity-enhancing technology to prepare optimum antigens necessary for antigens that lack immunogenicity. We also introduce the AI-based Epitope Prediction Algorithm (MODELAGON™) from MTI Ltd. for the production of antibodies that bind to specific sites (epitopes) of native human proteins.
→ Press release on the introduction of MODELAGON™ (Japanese)

Antibodies are created against particular foreign substances that have entered the animal body, so antibodies are more readily produced against proteins derived from distinctly different animal species. For example, proteins that are highly homologous between humans and mice may be poorly homologous between humans and chickens, so chickens may be considered suitable for obtaining more potent antibodies. MBL has developed various methods using mice, rats, hamsters, rabbits, guinea pigs, chickens, and sheep to obtain monoclonal antibodies for highly homologous proteins. Moreover, antibodies in some animals are known to have different structures characterized by high chemical and thermal stability, such as camelid antibody (VHH) and shark antibody (IgNAR). We are capable of developing antibodies of various animal species by a use of phage display and genetic modification technologies. We are also exploring search on antibody structures that have novel biological functions.