In this paper, Fluoppi technology was employed for spatiotemporal analysis of proteolysis-inducing regents such as PROTACs in the field of TPD.
Kaji T, et al., Characterization of cereblon-dependent targeted protein degrader by visualizing the spatiotemporal ternary complex formation in cells. Sci Rep.10, Article Number: 3088 (2020) [PMID: 32080280]

A New publication about Fluoppi was jointly launched with A*STAR Laboratory!

A New publication describing how we invented Fluoppi was jointly launched with Dr. Atsushi Miyawaki from RIKEN!

>> watch the videos in large size

Fluoppi (Fluorescent based technology detecting Protein-Protein Interactions) is a novel technology to detect Protein-Protein Interaction (PPI) in living cells. Fluoppi detects PPI as fluorescent Puncta in reversible manner. The most important advantage of Fluoppi is that construction of the PPI detection system is very easy and does not need fine optimizations such like a linker sequence or length.

Fluoppi is a tag technology. Tetramer fluorescent protein (FP-tag) and Assembly helper tag (Ash-tag) are genetically fused to Protein X and Y, respectively. For the FP-tag, tetramer Green Fluorescent protein Azami Green (hAG) can be used. For the Ash-tag, PB1 domain of p62 can be used. PB1 is 102 amino acid length domain which has the capability of electrostatically homo-oligomerization in a head to tail manner (Saio et al. 2010). In our in vitro Fluorescence correlation spectroscopy analysis, Ash-tag behaved as tetramer to octomer in diluted solution.

At first, proteins X & Y of your interest are fused to FP-tag and Ash-tag respectively.
We recommend to prepare all the eight possible constructs to identify the best workable combination.

Co-transfect the pairs of plasmids.

Because fluorescent signal of Fluoppi is very high, conventional fluorescence microscopy can be used to image the cell.

If the proteins interact with each other upon expression, fluorescent Puncta will be detected. Formation of Puncta is reversible so that they can be dissociated and the fluorescent signal will spread over the cell by PPI inhibitors, and vice versa by PPI inducer.

Because location of Puncta is not restricted to specific site inside the cell, Fluoppi can detect PPIs at several subcellular localizations such as cytosol, nucleus, and juxtamembrane. The upper pictures represent Puncta at several subcellular localizations, and the lower pictures are negative controls which express hAG tagged protein and Ash-tag without fusing any proteins. The images of juxtamembrane are taken by Total Internal Reflection Fluorescence Microscopy (TIRFM). 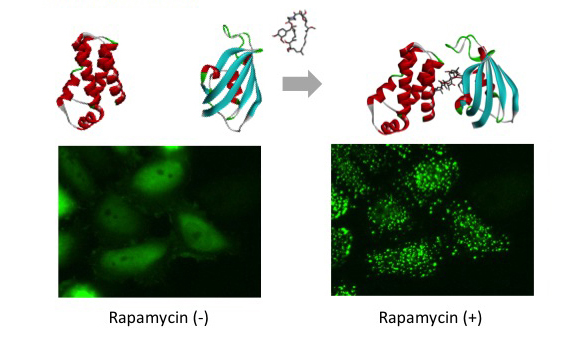 mTOR (FRB domain) and FKBP12 is a well known PPI whose interaction is induced by Rapamycin. The pair of, mTOR(FRB)-hAG and Ash-FKBP12 was selected from eight possible combinations in a viewpoint of Puncta formation efficiency. After adding Rapamycin small Puncta were gradually formed in several minutes. 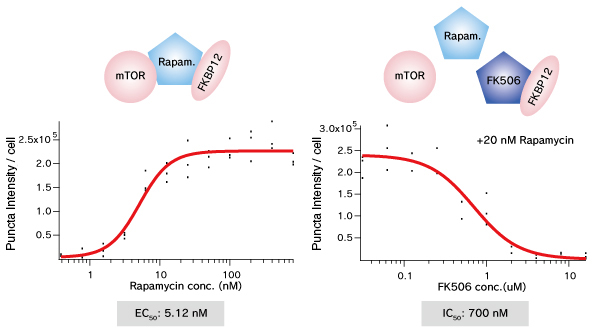 Dose dependent Puncta formations of Rapamycin (left) or competitive inhibition of Rapamycin by FK506 (right) were analyzed. Cells were treated with Rapamycin for 60 min in 37°C CO2 incubator followed by PFA fixation. Images were captured by ORCA-ER(Hamamatsu photonics) on IX71 fluorescence microscopy (Olympus). The spot detector plugin from ICY platform (Institut Pasteur) and IGOR software (HULINKS Inc.) were used for this analysis. 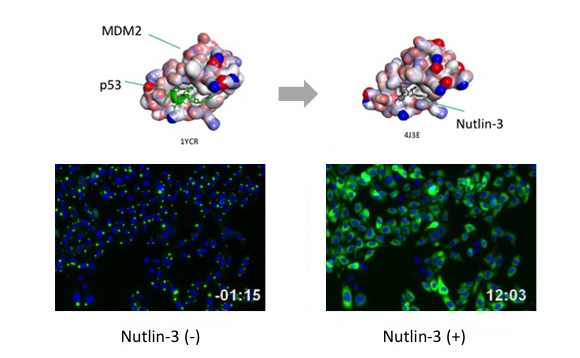 p53-MDM2 is a famous target of PPI inhibitors in the field of anti cancer drug development. We applied this PPI to Fluoppi for demonstration. First, hAG-MDM2 and Ash-p53 was selected from the 8 pairs as represented above, then stable CHO-K1 cell line was established by using two selection marker; G418 and Hygromycin. Fluoppi plasmids including Hygromycin resistance gene is under released at present. 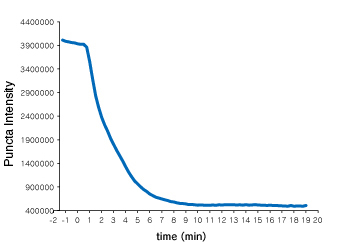 Dose dependent Puncta dissociations of Nutlin-3 were analyzed. Cells were treated with Nutlin-3 for 30 min followed by PFA fixation. Images were measured by InCellAnalyzer1000(GE healthcare).