CoralHue™ Dronpa-Green1 (DG1) is a monomeric green fluorescent protein that is photochromic: its fluorescence is reversible, with "on-off" switching by demand through exposure to di fferent wavelengths of light. DG 1 bleaches immediately following strong excitation at -500 nm. Bleached DG1 completely regains its bright green fluorescence after irradiation at -400 nm. This unique property of DG1 is useful for repeated measurements of mobility dynamics (e.g. diffusion, transport) of fluorescent-labeled molecules in living cells.

Note: The file is in a tab-delimited text format. It contains values of the wavelength (0.5nm spacing) and brightness (fluorescence intensity peak value normalized to 1). Use a spreadsheet program to create a spectrum that will help you in choosing the appropriate excitation filter, dichroic mirror and fluorescence filter. 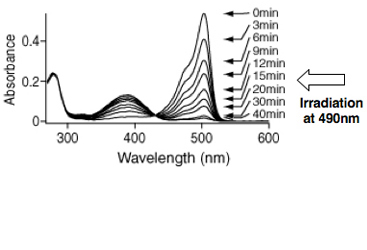 The absorption spectrum of Dronpa at pH7.4 displays a major peak at 503 nm and a minor peak at 390 nm. The absorbance of Dronpa at pH 7.4 were measured during continuous illumination at 490 nm ± 10. After a 40-min incubation, nearly all the Dronpa molecules had been converted into a neutral, nonfluorescent state. 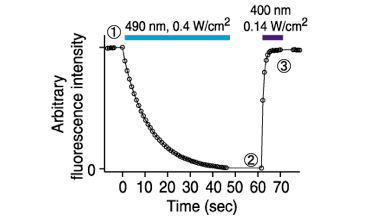 Dronpa was transfected into HeLa cells followed by fixation and the time course of fluorescence was monitored. Photoactivation of DG1 required much less photon energy than did photobleaching, with respective quantum yields of 0.37 (ΦPA) and 0.00032 (ΦPB).

Monitoring the nuclear import of ERK1-Dronpa in Cos7 cells

Molecular imaging of Sar1P-Dronpa in yeast

CoralHue™ Dronpa-Green1 can be recognized using antibodies as shown below.

※CoralHue™ fluorescent proteins were co-developed with the Laboratory for Cell Function and Dynamics, the Advanced Technology Development Center, the Brain Science Institute, RIKEN. MBL possesses the license and deals in the products.

Important Cookies information – this message will only appear once