CoralHue™ Fluo-chase Kit is based on the protein fragment complementation assay using our proprietary fluorescent protein , CoralHue™ monomeric Kusabira Green (mKG).
mKG is split into two inactive fragments, mKG_N and mKG_C, and do not emit
fluorescence on their own.

There is the possibility of a nonspecific mKG fluorescent signal from an unexpected protein-protein interaction. For example, in our original experiments, HEK293T cells expressing both the mKG_N with a flexible linker and the p65-mKG_C emitted a nonspecific fluorescent signal. The intensity of the signal was about 20% of the p65-mKG_N and p50-mKG_C co-expressing HEK293T cells. Why the unexpected interaction occurred is now under evaluation. 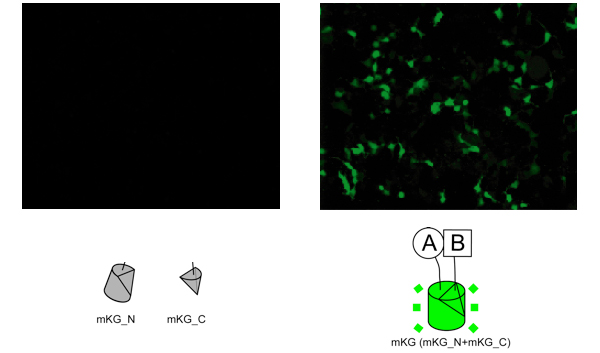 For a topological variety of mKG fragments and proteins of interest, CoralHue™ Fluo-chase Kit contains four regioselective vectors.Using the vector sets, all eight possible patterns for the proteins of interest (A and B) can be examined to select the most favorable fusion construct.

Detection of PPIs using CoralHue™ Fluo-chase Kit largely depends on the property of the protein complex, such as molecular mass, the direction of the N and C terminals, molecular proximity to each terminal, linker sequence, and so on. This product does not ensure the ability to detect all PPIs in nature.

※CoralHue™ Kusabira-Green was co-developed with the Laboratory for Cell Function and Dynamics, the Advanced Technology Development Center, the Brain Science Institute, RIKEN.
※Improvement of monomeric Kusabira-Green is an accomplishment of co-development by NEDO project (Project code: P06008, Team leader: Dr. Natsume Tohru)
※If you belong to a profit organization or a business corporation, or wish to use the product for profit or commercial purposes, please contact us.
[Marketing Department RUO Group]
TEL: +81-3-6854-3614 E-mail: support@mbl.co.jp

※CoralHue™ fluorescent proteins were co-developed with the Laboratory for Cell Function and Dynamics, the Advanced Technology Development Center, the Brain Science Institute, RIKEN. MBL possesses the license and deals in the products.