The reagent to detect MAIT cells

What are MAIT cells? 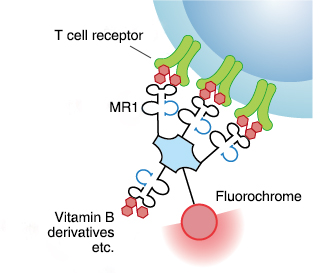 Mucosa-associated invariant T (MAIT) cells are classified as innate T cells, and are considered to constitute the largest T cell subpopulation in the human body. Initially, these cells were named after their localization in the lamina propria of the intestinal mucosa. However, it has been reported that they are frequently detected in the liver and among peripheral blood mononuclear cells (PBMCs).
MAIT cells are thought to respond to bacterial and fungal infections by recognizing microbial vitamin B metabolites presented by MR1 molecules. MAIT cells are activated through engagement of these metabolites with the T cell receptor (TCR), leading to production of IFN-γ, IL-17, IL-2, and granzyme B. Thus, MAIT cells exert cytotoxic activities on infected cells, and prevent the spread of an infection.

The MHC class I-related protein MR1 is a membrane protein non-covalently bound to β2-microglobulin (β2m), which is known as one of the non-classical MHC class I molecules. It is expressed in almost all cell types of the body. Under steady-state conditions, it is not present on the cell surface, but localized in the endoplasmic reticulum. Upon stimulation, for example, during an infection, MR1 molecules associated with microbial vitamin B metabolites migrate to the cell surface to present them to and thereby activate MAIT cells.

What is an MR1 Tetramer?

An MR1 Tetramer is a reagent prepared by tetramerizing biotinylated human MR1/β2m complexes with the help of phycobiliprotein-labeled streptavidin.

MAIT cells have been proposed to act as innate T cells that primarily respond to bacterial and fungal antigens. Recently, MAIT cells were found to be associated with autoimmune diseases. In addition, it has been reported that intestinal bacteria play a role in the development and differentiation of MAIT cells, therefore gaining increasing attention by researchers in the field of intestinal immunity.

How to prepare ligand-loaded MR1 Tetramer?
*The product does NOT include the MR1 ligand.


Ac-6-FP [A ligand for negative control of MR1 tetramer]

PBMCs from healthy donors were collected from freshly isolated heparinized peripheral blood according to standard methods. These PBMCs were stained with T-Select Human MR1 Tetramer v2-PE loaded with 5-OP-RU or Ac-6-FP, as described in the datasheet.
The single lymphocyte population was defined using the FSC/SSC and FSC-H/FSC-A gates, and the viable cell population was defined using the FSC/7-AAD gate. 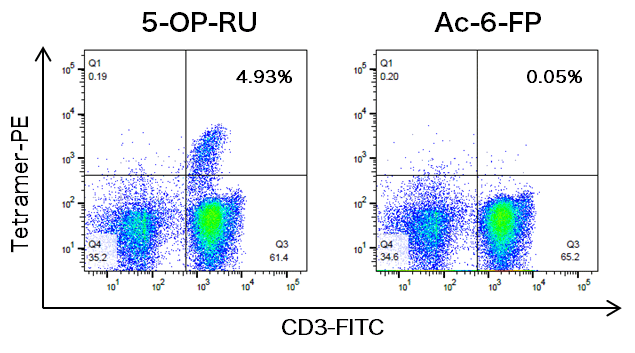 The reagent for MR1 staining enhancer has been launched!!
Please check the product information. [Click here!]

PBMCs from healthy donors were stained with T-Select Human MR1 Tetramer v2-APC loaded with 5-OP-RU or Ac-6-FP, or unloaded. It was compared with staining data using human MR1 tetramer of competitor A loaded with 5-OP-RU or 6-FP, or unloaded.
The single lymphocyte population was defined using the FSC/SSC and FSC-H/FSC-A gates, and the viable cell population was defined using the FSC/7-AAD gate. 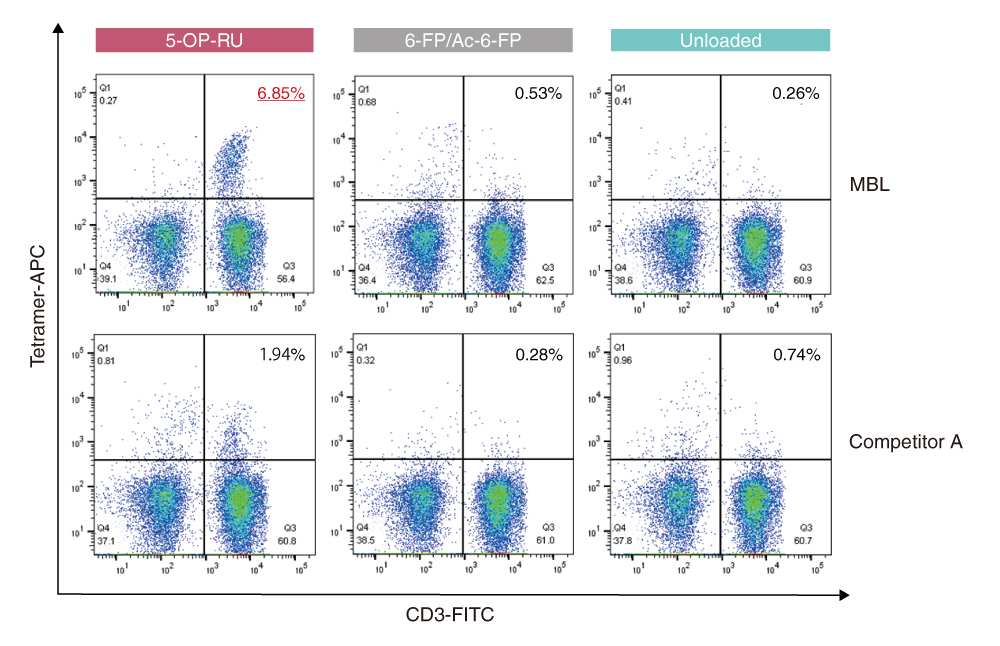 Product list  *The product does NOT include the MR1 ligand.