The RiboTrap Kit is used to isolate RBPs and other proteins that are associated with mRNA, ribosomal RNA (rRNA), transfer RNA (tRNA), viral RNA, miRNA or any other RNA of interest from either the cytoplasmic or nuclear extract of cultured mammalian cells.

The RNA of interest is modified with 5-bromo-UTP (BrUTP) by in vitro transcription, followed by incubation with a cell lysate (cytoplasmic extract or nuclear extract) to form the assembled RNA-RBP complexes. The BrU-labeled RNA-RBP complexes are then immunoaffinity-purified by anti-BrdU monoclonal antibody (mAb), which cross-reacts with BrUTP. RBPs associated with the BrU-labeled RNA can be identified by immunoblotting or mass spectroscopy.

Three (3) different wash buffers provided in the RiboTrap Kit allow for analysis of both weakly and tightly bound RBPs.

Example of analysis using RiboTrap Kit
(with Wash Buffer I ) 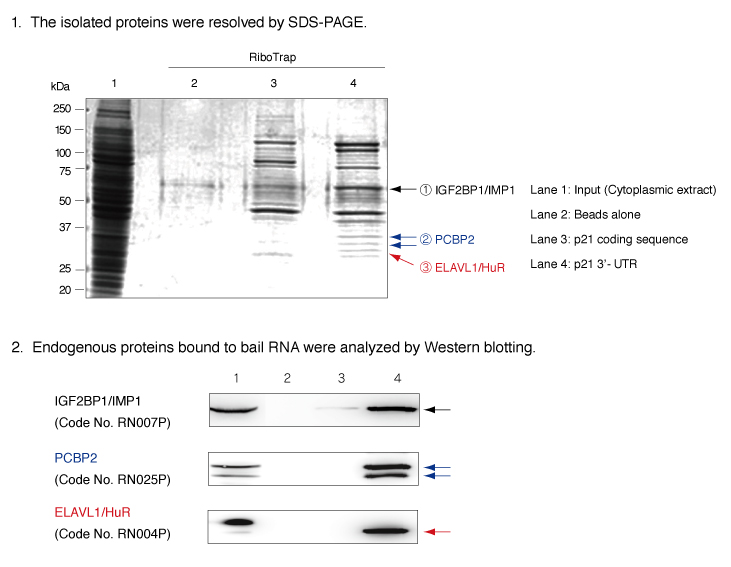 BrU-labeled 3'-UTR of p21 mRNA was incubated with cytoplasmic fraction of HEK293T cells to form mRNA-protein complex followed by immunoaffinity-purification using anti-BrdU antibody. Endogenous proteins bound to bait RNA were identified by LC-MS/MS, and these binding statuses were confirmed by Western blotting using antibodies against each protein.