An emerging interest in RNA world

Items flagged with star marks are linked to explanation of each function and related product list. 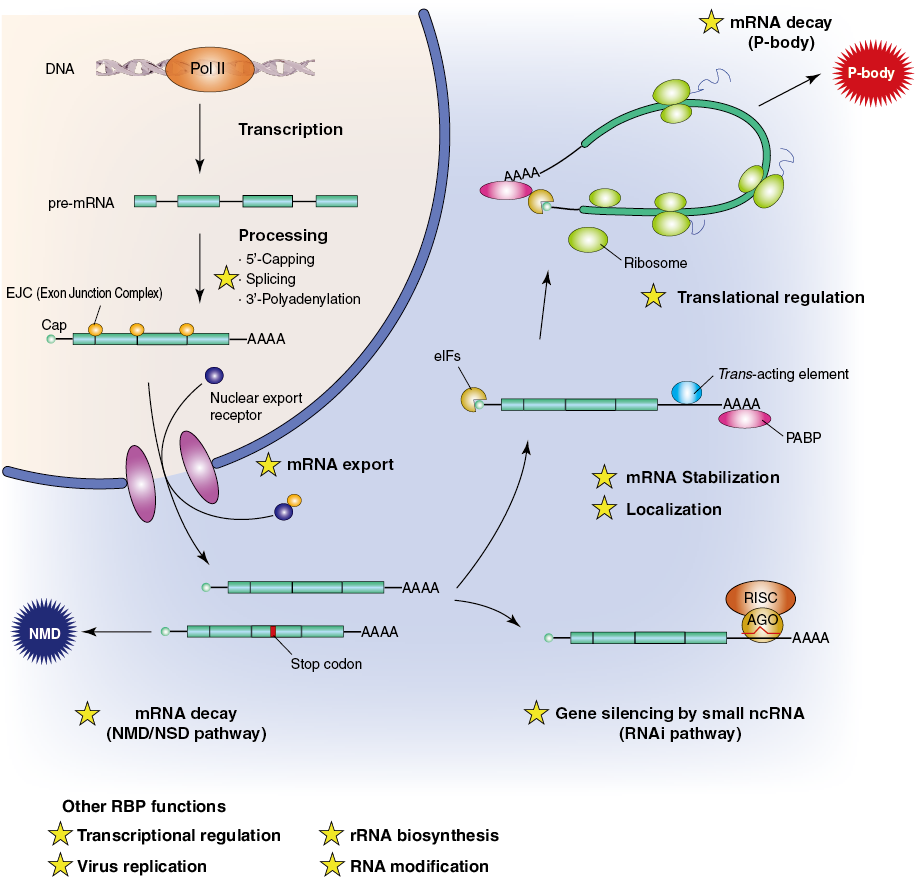 In eukaryotic cells, there are a lot of regulatory mechanisms, which control quality of mRNA in various steps from processing of precursor mRNA (pre-mRNA) in nucleus to translation into protein through cytoplasmic ribosome. Among these processes, RBPs play a primary role in regulating the behavior of the functionally related genes by forming the ribonucleoprotein (RNP) clusters.

A non-coding RNA (ncRNA) is a functional RNA molecule that is not translated into a protein, whereas a mRNA is translated into a protein. The ncRNAs include highly abundant and functionally important RNAs such as transfer RNA (tRNA), ribosomal RNA (rRNA), as well as small ncRNA and long ncRNA. The main classes of small ncRNAs are miRNA, short interfering RNA (siRNA), and PIWI-interacting RNA (piRNA), and all of them play an important role in RNA interference (RNAi) pathway. Many reports suggest that long ncRNAs are involved in structure of functional nuclear domain. 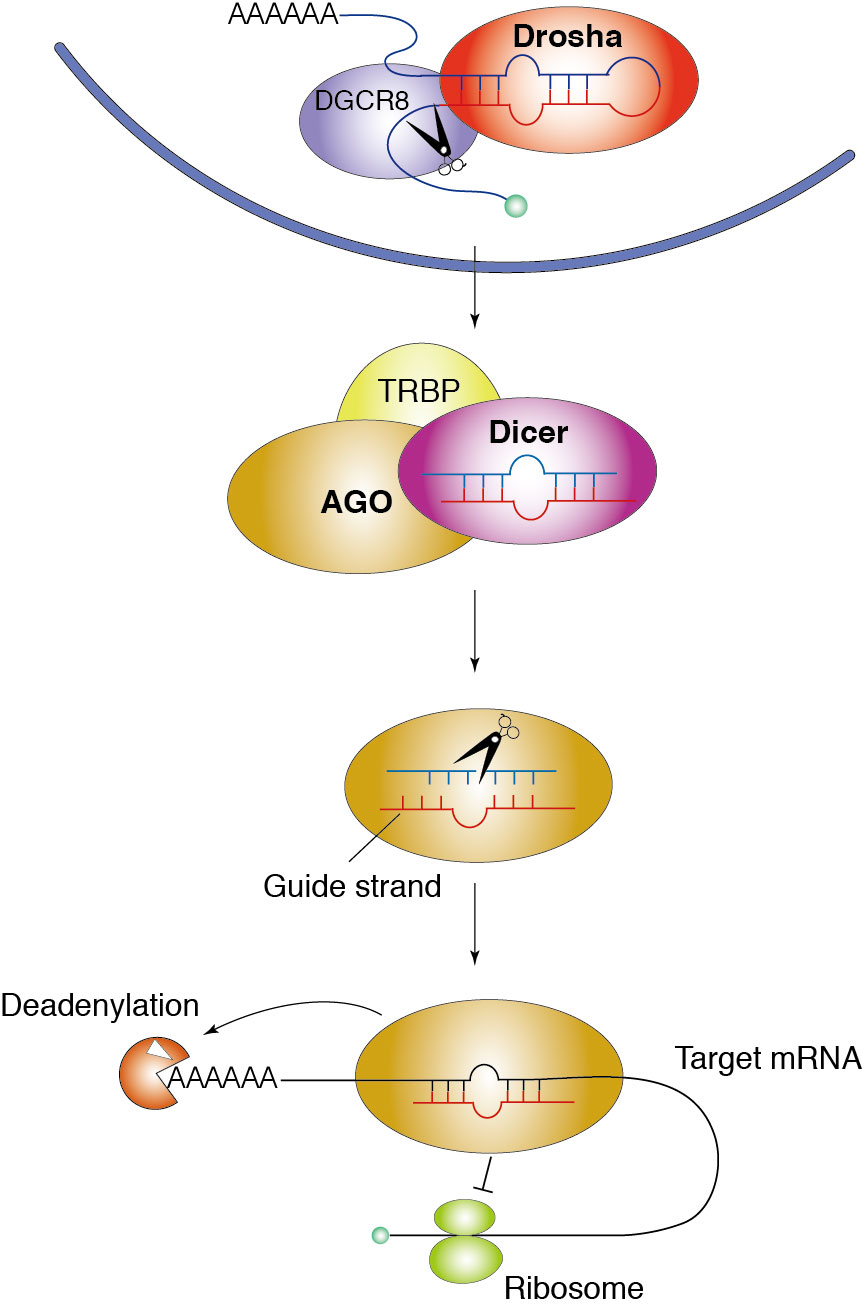 MicroRNA (miRNA) is mainly transcribed from endogenous miRNA gene as a primary transcript (pri-miRNA), which contains 65-70-nucleotide stem-loop structure. The hairpin structure of pri-miRNA is excised by Drosha, an RNase III-family enzyme, to yield a precursor miRNA (pre-miRNA). Nuclear export factors, such as Exportin-5, transport the pre-miRNA from nucleus to cytoplasm where Dicer, another RNase III enzyme, cleaves the pre-miRNA to generate a miRNA-miRNA* duplex of 21-25 nucleotides in length. The duplex is unwound and one strand (guide strand) is loaded onto an Argonaute (AGO) protein. The guide strand directs the AGO to target mRNAs that contain sequence complementarity to the guide strand in the 3'-untranslated regions (3'-UTRs) to suppress translation of the target mRNAs. 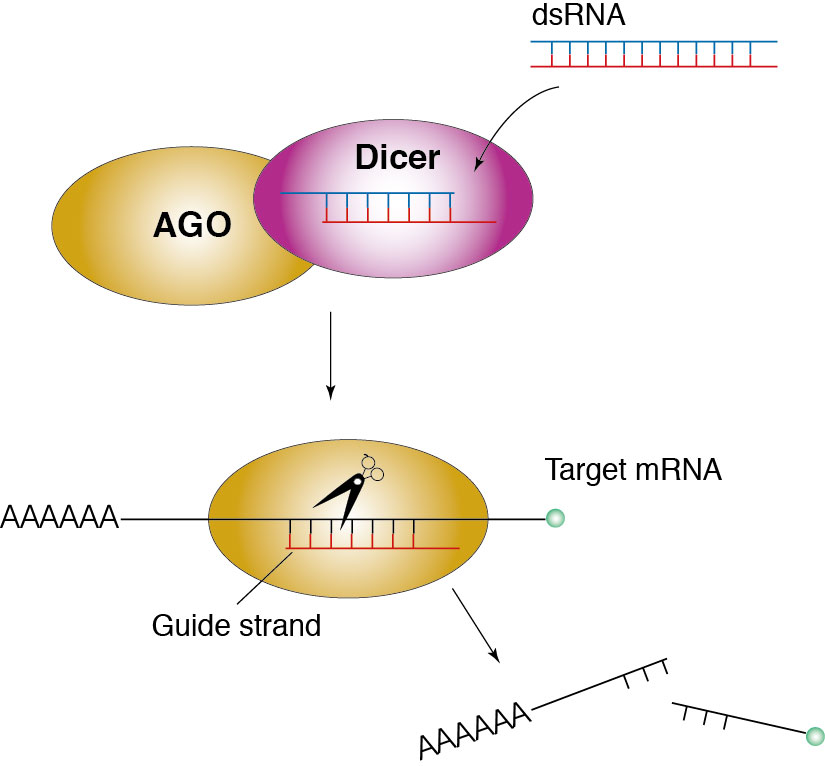 siRNA is thought to function as a defense mechanism against RNA virus. Dicer has RNase III activity and produces a siRNA duplex of 21-25 nucleotide length from long double-stranded RNA (dsRNA) in the cytoplasm. The guide strand of the siRNA duplex is loaded onto AGO, a component of RNA-induced silencing complex (RISC), where it gets attached to complementary mRNA sequences and silences those transcripts. The unwound passenger strand is removed from the RISC and degraded.

PIWI-interacting RNAs (piRNAs) are derived from single-stranded transposon transcripts. piRNA fragments are produced by the poorly understood "primary processing pathway", which does not require RNase III activity. piRNA is loaded onto PIWI, a family of protein only expressed in germ cells, where it induces the cleavage of complementary transposon transcripts.

Recent transcriptome analyses have revealed that transcription occurs at more than 90% of human genomic DNA regions, and more than 95% of transcripts are predicted to be ncRNAs. That is to say, most of the transcribed RNAs are ncRNAs. Although annotation of ncRNAs has been started in several species, the functions of most of them are still unknown. Some of them have been confirmed to be mRNA-like ncRNAs that undergo post-transcriptional processing, such as 5'-capping, splicing and 3'-polyadenylation, without being translated. As the study on RNA became an active area of research, it has been unveiled little by little that the most of the mRNA-like ncRNAs reside in the nucleus and function as an essential structural determinant of nuclear functional domains. ncRNAs and RBPs are aligned and regulated in a spatiotemporally specific manner in each nuclear functional domain. These findings support the noticeable concept, ‘RiboCluster’, propounded by MBL. 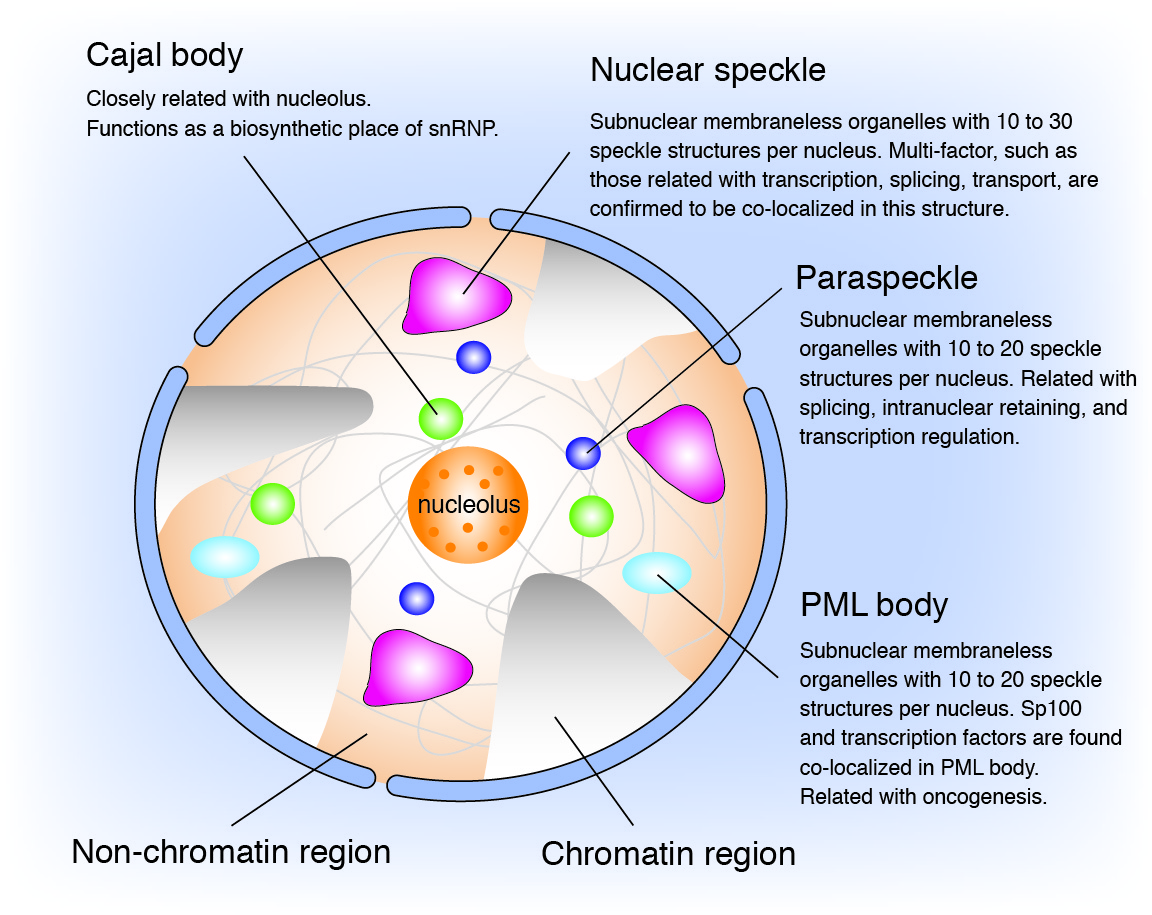 Introduction of RIP-Certified Antibodies, which can be used for RIP-Assay, and RBP Antibodies, which are suitable for IP and WB, classified by RBP functions. Please see each product list for detailed information.

Splicing removes the introns in pre-mRNA transcribed from genome and joins the exons together. Great varieties of RBPs are involved in inducing the alternative splicing. The resulting different mRNAs may be translated into different proteins in isoforms and thus increase the diversity of the protein.

Once transcribed in nucleus, mRNAs undergo a series of processing (5'-capping, splicing and 3'-polyadenylation) followed by export to cytoplasm mediated by proteins including TAP, RanGTP and RBPs. The RNA export from nucleus to cytoplasm is strictly regulated. During the export process, RBP also plays a primary role for quality control of mRNAs.

Regulation of stability and decay

An AU-rich element (ARE) is a region with frequent adenine (A) and uridine (U) nucleotides mainly in the 3'-UTR of a mRNA. Binding of RBPs that have endonuclease activity to this region induces its degradation. Early response genes, which response to a wide range of external stimuli, including oncogenes and cytokines, have relatively short half-lives because of the frequent AREs in these RNAs. A certain type of RBP, including HuR, binds to ARE and regulates the stability of its target RNA by inhibiting the access of its endonuclease. Similar to AREs, many cis-elements have been found to be associated with stabilization and degradation of their mRNA and to control their mRNA quality by binding with variety of RBPs. 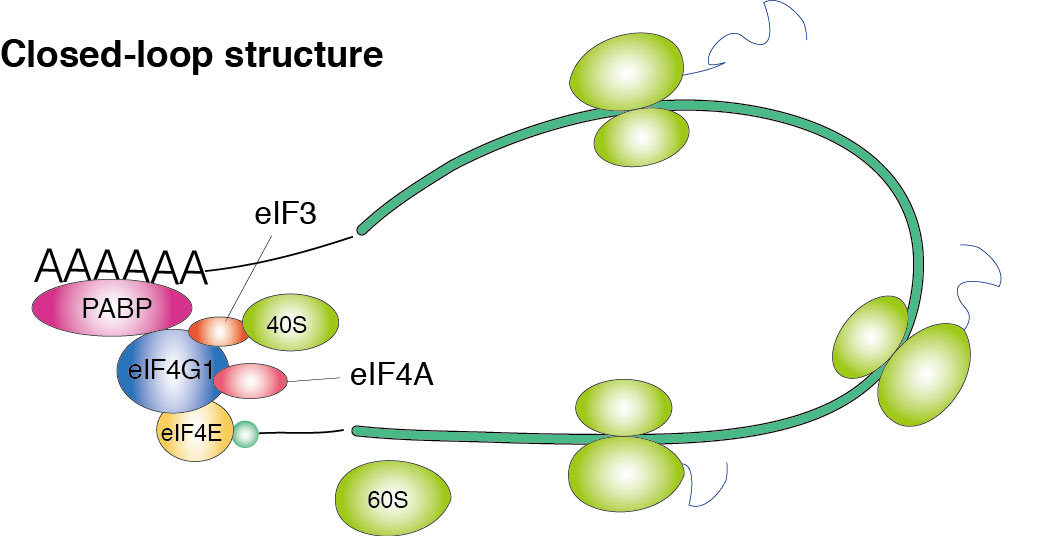 Initiation of efficient and optimal translation of mRNA depends on the formation of a closed-loop structure. Basically, it is formed by eIF4E, a cap-binding protein, and a poly(A) binding protein (PABP) through a scaffold protein, elF4G1, as a linker. Many proteins, such as Hu proteins, a family of RBPs, are suggested to be involved in stabilization of this closed-loop structure.

Following the RNA export from nucleus to cytoplasm, mRNAs are transported along cytoskeleton to peripheral end with the aid of motor protein (MP) and RBPs that regulate localization of mRNAs. RBPs protect mRNAs from degradation by binding to their target mRNAs during the localization. In this manner, the mRNA localization in cytoplasm is regulated to enable the efficient translation, which occurs at the "right place" on the "right time". Recent studies have shown that RBPs play an important role in regulation of mRNA translation with spacio-temporal manner.

RNA interference (RNAi) is a mechanism that controls the gene expressions in a sequence specific manner. Small ncRNAs, including miRNAs, siRNAs as well as piRNAs, function as the guide molecules that incorporated into RNA-induced silencing complex (RISC). They control the translation and degradation of their target mRNAs that have the complementary sequences with their guide strands. RNAi has recently been shown to play an important role in a variety of biological phenomena including the dynamics of early development, morphogenesis, cell growth and tumorigenesis. Small ncRNA does not function directly by itself. It functions only when it is incorporated into Argonaute (AGO) protein, a key component of RISC. It functions as a guide to recognize the target mRNA. The translational inhibition and degradation of the target mRNA are due to the activities of the RISC components including AGO and GW182. Recently, post-transcriptional regulation through these small ncRNAs is attracting the attention of researchers.

RBP is also involved in various events in the cell such as transcriptional regulation, rRNA and tRNA biosynthesis, mitochondrial biosynthesis, and virus replication.